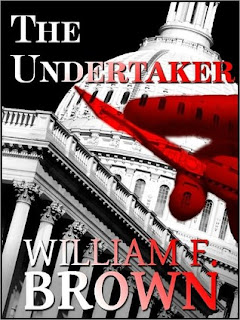 From Goodreads:
Curiosity can kill more than cats, but when Pete Talbott found himself at the wrong end of Gino Parini's .45 reading his own obituary, it was a mystery he couldn't leave alone. From the cornfields of Ohio to the gritty slums of Chicago, a bloody kitchen in a Back Bay townhouse, New York's Washington Square, and the nation's Capitol itself, the hunt is on. Someone with a penchant for sharp scalpels and embalming tables is planting bodies under other people's names, and if Talbott doesn't stop them, he and his quirky new girlfriend Sandy Kasmarek will be next on the Undertaker's list.

My Review:
This was a really high tension-packed adventure novel. Full of threats, various tricks, like buying 2 tickets one way, then going again disguised for another, the way they wanted to go, and various chase scenes, well, yeah, this was a very clever book! I really enjoyed it!

Pete was a tortured character, he'd lost his wife, and saw her in clouds, since he'd promised her on her deathbed that he'd find someone new, and if he didn't, she'd haunt him, and so she did that. And then he gets caught in this mystery, where he and his wife have been buried again, only it's not them. It's people who've been murdered, and using names of deceased couples (or one single guy, which leads Pete to Sandy) who live far away, they bury the bodies. Pete only has his memories of his wife, so when a gun-toting assassin knocks in on his life with the obits of the fake Pete and Theresa Talbott, he dives straight into a mystery the size of several states, all the places mentioned in the description, yeah. A really great mystery!

I really enjoyed Sandy as a character, she was strong, tough, and smart, full of great little skills, like hotwiring cars, hair-styling, fighting, and photography. It was quite interesting to see her banter with Pete, since he was getting over his wife, that he would move on, and yeah, that was quite funny!

Loved this book, it was a lot of fun to read about all the tricks that they pulled to stay ahead of the bad guys, and the ending was so sweet! So check out this book! 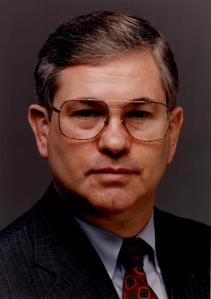 Bio:
I live in Ohio. As a Vice President of the real estate subsidiary of a Fortune 500 corporation, I traveled widely in the US and abroad. A native of Chicago, I earned a BA in History and Russian Area Studies and a Master of Urban Planning degree from the University of Illinois. (Go Illini!) I’ve been active in politics (I had the stupidity to run and the misfortune to win a -year seat on a County Board of Supervisors) (more hard time than you’d get for armed robbery, car theft, or embezzlement in most states!) and active in numerous civic organizations. I served in the US Army and was a company commander and drug counselor. (The only two places in the country that teach leadership and organizational management are the Boy Scouts and the Army) When I’m not writing, I like to play golf (usually poorly) paint landscapes in oil or acrylics and running 5Ks. (slower every year) .

My wife and I have traveled widely in Russia,Germany, the Caribbean, England, Ireland, Scotland, Poland, Hungary, the Czech Republic, Italy, Austria, Holland, Egypt, and Israel.

Contact and Buy AKA Links:
Website/Blog
Amazon
Nook
Sony
Posted by Louisa @ Words I Write Crazy at 10:00 AM