Week 3 Review: Life is But a Dream 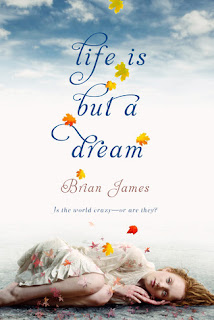 From Goodreads:
Alec and Sabrina are crazy in love. Problem is: Sabrina's really crazy.

Sabrina, an artist, is diagnosed with schizophrenia, and her parents check her into the Wellness Center. There she meets Alec, who is convinced it's the world that's crazy, not the two of them. They are meant to be together; they are special. But when Alec starts to convince Sabrina that her treatment will wipe out everything that makes her creative, she worries that she'll lose hold of her dreams and herself. Should she listen to her doctor? Her decision may have fatal consequences.

My Review:
This was a great book! Very strange, because yes, she does have a mental problem, and since she's the narrator, we see what she does, so yeah, there were a few scenes were it was hard to understand what exactly was going on, but yeah, sometimes not knowing is good.

I really enjoyed Alec and Sabrina. After all, they connect in a Wellness Center, and he has some ideas that he doesn't believe in, because he was sent in because he had done some bad things. But he didn't know that she was in there for schizophrenia, that she believed in the plan that they had made.

This was a bit of a sad book, but it was also good, Sabrina was very considerate, very kind, and she saw the world in a different way, and yeah, while that means that she has a problem, it was also beautiful, and wonderful to be in, knowing that it's only what she sees, not what's real.

I really did enjoy this book, it deals with a pretty serious condition, and yeah, it was really good!