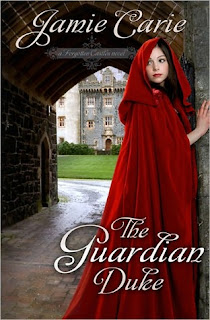 From Goodreads:
The Guardian Duke is award-winning novelist Jamie Carie’s most exciting story yet, a uniquely arranged Regency-era romantic adventure where hero and heroine know each other through written letters but have yet to meet.

Gabriel, the Duke of St. Easton, is ordered by the King to take guardianship over Lady Alexandria Featherstone whose parents are presumed dead after failing to return from a high profile treasure hunt. But Alexandria ignores this royal reassignment, believing her parents are still alive and duly following clues that may lead to their whereabouts. Gabriel, pressured by what are actually the King's ulterior motives, pursues her across windswept England and the rolling green hills of Ireland but is always one step behind.

When they do meet, the search for earthly treasure will pale in comparison to what God has planned for both of them.


My Review:
This was a fantastic book! It was cute, with a romance that was mostly in Gabriel's head, because they don't meet-they just write each other letters. And it has mystery, the mystery of her parent's disappearance, because they've been gone for a year, which is why she is now Gabriel's ward.

This book, it was a lot like a game of cat and mouse, hide and seek, with Alex being the cat, or the hider, and Gabriel the cat or the seeker, because she goes off investigating, and then Gabriel, once he realizes that she's gone, follows her, and yeah, he gets close, but he wasn't quite fast enough!

I really enjoyed all these characters Alex was a bit head strong and impulsive, and had some ideas that you'd think wouldn't work, and was a bit trusting, but it worked out well for her. Gabriel, well, things aren't good for him, he losses his hearing, and Alex is about the only bright spot in his life. So yeah, that was fun and entertaining, to watch them grow closer in letters, but not in geographical distance!

Yeah, this was a really good book, and I can't wait to read more, because I want to know what's going to happen next!