Week 2 Review: The Whole Story of Half a Girl 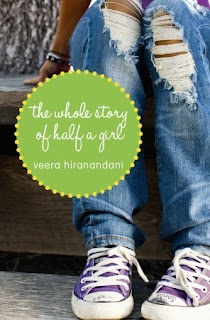 From Goodreads:
After her father loses his job, Sonia Nadhamuni, half Indian and half Jewish American, finds herself yanked out of private school and thrown into the unfamiliar world of public education. For the first time, Sonia's mixed heritage makes her classmates ask questions—questions Sonia doesn't always know how to answer—as she navigates between a group of popular girls who want her to try out for the cheerleading squad and other students who aren't part of the "in" crowd. At the same time that Sonia is trying to make new friends, she's dealing with what it means to have an out-of-work parent—it's hard for her family to adjust to their changed circumstances. And then, one day, Sonia's father goes missing. Now Sonia wonders if she ever really knew him. As she begins to look for answers, she must decide what really matters and who her true friends are—and whether her two halves, no matter how different, can make her a whole.

My Review:
This was a really good book-middle school main character. So younger then I like to read about, so it was a bit harder to connect to her, beyond the fact that I've never been to private school, and I'm not Jewish or Indian, and my parents have had the jobs they currently have, since at least since I was 5. So yeah, there was that degree of not connecting.

This is the story of Sonia finding her place, where she belongs, who she is, what she believes, and those questions that you usually don't really get around to till something major happens in you life and you have to figure it out. For Sonia, her dad losing his job, and all the changes that brings, is her's.

The popular girls wanted her on the cheer squad because of the colour of her skin, but they aren't the nicest people, and yeah, they aren't the only ones that she hangs out, especially as she learns more about the, but they are the ones that pretty much made the biggest emotional splash for Sonia in her discoveries.

This was a good book. It just wasn't totally my kind of book. But it was good!