Week 3 Review: The Night She Disappeared 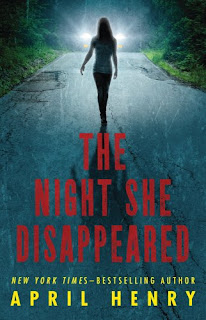 From Goodreads:
Gabie drives a Mini Cooper. She also works part time as a delivery girl at Pete's Pizza. One night, Kayla—another delivery girl—goes missing. To her horror, Gabie learns that the supposed kidnapper had asked if the girl in the Mini Cooper was working that night. Gabie can't move beyond the fact that Kayla's fate was really meant for her, and she becomes obsessed with finding Kayla. She teams up with Drew, who also works at Pete's. Together, they set out to prove that Kayla isn't dead—and to find her before she is.

My Review:
This was a very creepy, and wonderful book! Such awesomeness in the characters, and as they solve this mystery of what happened to Kayla, and why the guy wanted Gabie instead. And yeah, there were some personal things going on, too, which just adds to the complications, seeing as they are teens, and not police!

Yeah, this was a really captivating mystery, because a young girl's been kidnapped, and the wrong girl was taken from the perspective of the kidnapper, so yeah, there's that. And there's finding clues that the police missed, and launching an investigation of their own.

I really enjoyed Gabie and Drew, they worked well together, and they grew close over this book, which was nice, and yeah, that was great, and coupled with the fact that they're in this high pressure environment of trying to find this girl before she dies, yeah. I wish we could've had more book to learn more about the bad guy, but oh, well.

I really enjoyed this book, and yeah, I must check out April Henry's other books!