Week 4 Review: Daughter of the Centaurs 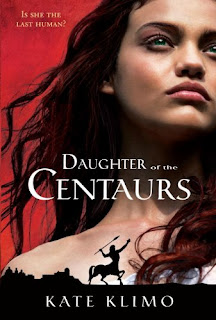 From Goodreads:
Malora knows what she was born to be: a horse wrangler and a hunter, just like her father. But when her people are massacred by batlike monsters called Leatherwings, Malora will need her horse skills just to survive. The last living human, Malora roams the wilderness at the head of a band of magnificent horses, relying only on her own wits, strength, and courage. When she is captured by a group of centaurs and taken to their city, Malora must decide whether the comforts of her new home and family are worth the parts of herself she must sacrifice to keep them.

My Review:
This was a pretty amazing book! I wouldn't want to live in that world, but it's pretty cool, with her being the last human and all, being surrounded by centaurs, and the threat of Leatherwings. IT was pretty cool!

Malora thinks that centaurs are "perfect beings." And since she, as a young girl, has always wanted something to do with horses, well, the centaurs, who have the upper body of a human, and the lower body of a horse, well, yeah, that makes perfect sense!

I was pretty sad when she lost Sky, the stallion, because he'd been with her through some pretty hard times, and then he was gone, so yeah, I hope that is dealt with in the sequel, because I would really, really enjoy that, like, so much!

This was a pretty fantastic book, and there a lot of threads that hopefully will be dealt with in the next book, and yeah, my hopes are high!