Week 4 Review: The Darlings in Love 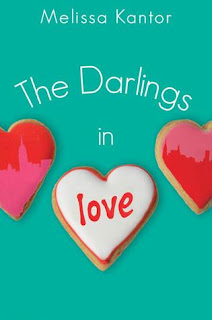 From Goodreads:
The Darlings have just begun their second semester of ninth grade, and love is in the air. Victoria can hardly believe how perfect life is now that Jack is her boyfriend. Every moment they spend together seems to be better than the last. Meanwhile, Natalya is thrilled and a little nervous when her old crush, Colin, challenges her to a rematch of an unfinished chess game. Could he still like her too?

Jane can't help but feel a tad jealous of her two best friends' exciting romantic prospects—even if she has sworn off love. Performing in a production of famous love scenes is just about the last thing she wants to do. But when Jane meets her acting partner—sweet, gorgeous Simon—she may just have to give love another chance.

Still, nothing about love is as simple as it seems. Victoria's plan to surprise Jack with a romantic night out on Valentine’s Day goes disastrously wrong, and just when things start heating up between Natalya and Colin, Natalya discovers that Colin has been hiding something important from her. Even as Jane falls hard for Simon, she has to wonder: what if he's too good to be true?

In the face of both joy and heartbreak, the Darlings know that they'll always have each other. Boys come and go, but the Darlings are still forever.

My Review:
Well, first off, I'll have to say that I haven't read the first book in the series. And while this book would have been better with it, it was pretty good on it's own. The one big complaint about it, however, is that the girls, they seem to be more in grade 7 from the way that they were acting, than grade 9, and this is speaking as someone who's in grade 12.

So there's the 3 girls, Victoria who's in a steady relationship with her boyfriend, Jack. Natalya who has her ex, Colin, and things might be heating up there. And then there's Jane, who likes Simon, an actor, and sometimes with actors, well, they're pretty good at pretending, so you can't always know when they're lying.

There's a lot of high school drama in this book, which leads to the thing that this book was written for a younger audience, and there were personal things going on each girl's life. And since we got to be in each girl's head, we got to see this.

This was a good book, it's just a bit young for me, though I did enjoy it a fair bit!