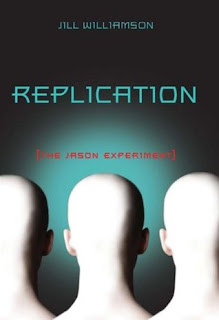 From Goodreads:
When Your Life Is Not Your Own
Martyr---otherwise known as Jason 3:3---is one of hundreds of clones kept in a remote facility called Jason Farms. Told that he has been created to save humanity, Martyr has just one wish before he is scheduled to 'expire' in less than a month. To see the sky.

Abby Goyer may have just moved to Alaska, but she has a feeling something strange is going on at the farm where her father works. But even this smart, confident girl could never have imagined what lies beneath a simple barn. Or what would happen when a mysterious boy shows up at her door, asking about the stars.

As the reality of the Jason Experiment comes to light, Martyr is caught between two futures---the one for which he was produced and the one Abby believes God created him to have. Time is running out, and Martyr must decide if a life with Abby is worth leaving everything he's ever known.

Martyr breaks out of the lab that he's lived in his whole life to see the sky, and he ends up in Abby's bedroom, and at first she thinks she's this guy she knows at school, and slowly the plot comes in. Like Martyr and the guy she knew, are clones of her dad's boss. And her dad works at the lab that Martyr lived at, and was the one who inadvertently helped Martyr break out. Yep. And then they like each other, and she tries to explain the bible, and there's friends, and then later on there's a funny part where he proposes marriage because they like each other, and yeah, that was really funny!

As the plot deepens, and they discover more clues, and Martyr is brought back to the lab, and then there's some more information, well, it made sense, and it lead to action, where they break out a lot of clones with the help of the police, and there's drama and conflict, because people want money, and people are evil, and yeah, that was action-packed! Loved it!

The ending was really sweet, with the clones having a place, and how they're going to learn how to be a part of society, well, that was really hopeful, and how they got to see the sky, and yeah, that was just the best! Loved it!