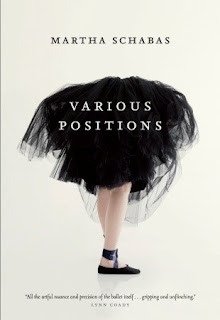 From Goodreads:
Nuanced, fresh, and gorgeously well-written, Martha Schabas' extraordinary debut novel takes us inside the beauty and brutality of professional ballet, and the young women striving to make it in that world. Shy and introverted, and trapped between the hyper-sexualized world of her teenaged friends and her dysfunctional family, Georgia is only at ease when she's dancing. Fortunately, she's an unusually talented and promising dancer. When she is accepted into the notoriously exclusive Royal Ballet Academy--Canada's preeminent dance school--Georgia thinks she has made the perfect escape. In ballet, she finds the exhilarating control and power she lacks elsewhere in her life: physical, emotional and, increasingly, sexual.

This dynamic is nowhere more obvious than in Georgia's relationship with Artistic Director Roderick Allen. As Roderick singles her out as a star and subjects her to increasingly vicious training, Georgia obsesses about becoming his perfect student, disciplined and sexless. But a disturbing incident with a stranger on the subway, coupled with her dawning recognition of the truth of her parents' unhappy marriage, causes her to radically reassess her ideas about physical boundaries--a reassessment that threatens both Roderick's future at the academy and Georgia's ambitions as a ballerina.

My Review:
It was honestly hard to read this book. I really enjoyed the writing, but unfortunately, I didn't like the story, because of the characters, what the characters thought (really, I should only say Georgia, and what Georgia thought about Rodrick, and how Rodrick acted.) I refuse to believe that all ballet is like that, that mean. Anyways.

Georgia isn't really a character that I could connect to, she objectifies herself, she tries to help people, but they take it the wrong way, like her one friend whom she gives a schedule for dieting, and that friend took it, tried it for a while, and then pretty much stopped eating at all. She thinks-because of an off-hand comment-that all guys are expecting sex if she just looks at them, and while there is one scene where she gets the number of a guy on the train, well, it just wasn't a good read with all that. She just really annoyed me with all that she did, like sleeping with the one boy, telling lies, building up expectations in her mind and when they didn't come true, well, she was left in quite a bit of a situation like when she took pictures of herself and put them into a drawer of Rodrick's desk tied up with her underwear.

I really enjoyed the writing, it was very good, and the plot, with different characters, it would've been a way better book. Part of the reason that I didn't like it was because it's a hard topic, with lots of scandals, and this as just another one, and yeah, not something I like to read.

If you like books where the character gets herself into situations that are of her own making, check this book out. I really am sorry that I enjoy this book, but oh, well.