Cowboy and the Vampire, Blood and Whiskey: Review and Giveaway 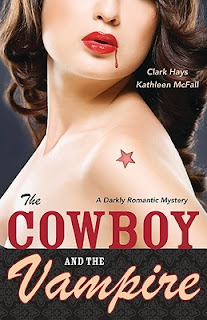 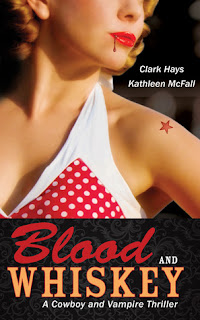 From Goodreads:
Reporter Lizzie Vaughan doesn't realize it, but she has 2,000 years of royal Vampiric blood coursing through her veins. Neither she nor Tucker, her cowboy lover, has any idea that Julius, the leader of the undead, has a diabolical plan to reign over darkness for all eternity--with Lizzie at his side. Lizzie battles for her life--and her soul--as she and Tucker find themselves caught up in a vampire war, pursued by hordes of Julius' maniacal, bloodthirsty followers. Who will be left standing when the sun rises?

From Goodreads:
Wanted: Lizzie Vaughan, Dead or Alive. Relationships are always hard, but for a broke cowboy and a newly turned Vampire, true love may be lethal. After barely surviving an undead apocalypse in The Cowboy and the Vampire, Tucker and Lizzie hightail it back to quirky LonePine, Wyoming (population 438), to start a family. But she's got a growing thirst for blood and he's realizing that mortality ain't all it's cracked up to be when your girlfriend may live forever. With a scheming Vampire nation hot on their boot heels and a price on her head, how far will Lizzie and Tucker go to protect their unlikely love? Blending evolution, religion and an overly sensitive cow dog named Rex, Blood and Whiskey drags the Vampire myth into the modern west, delivering double-barreled action, heart-pounding passion and wicked humor.

My Review:
I really, really, really enjoyed these books! They were funny, with lots of wit, and they made real the supernatural world of vampires. I loved how well this was plotted, and how things came together, and just how funny this book was!

Now, I'm not going to capitalize that, the v in vampires, because having seen it done throughout the books was the only thing that I didn't like about them. Though I could see that it could be a running joke, if it didn't annoy me, it would've made me laugh. But I laughed at a lot of other parts, so that more then makes up for that!

That the whole first blood thing, and it turns out that she got pregnant her first time, well, yeah, it changed the game, and was a pretty good thing in that it saved her life! And Tucker's, too. Which lead to the second book of awesomeness!

I loved the politics of the 2nd book, especially near the end, the baby that she's carrying is a game changer in a world that hardly ever changes. So awesome to watch her take charge like that, and changing things for the better! And I'd love a 3rd book, to meet the baby!

This was a really great series, one that I've enjoyed, and I'd love to read more!

The Cowboy and the Vampire: 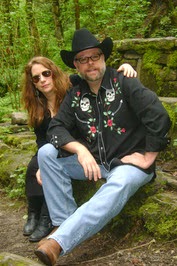 Bio:
Clark Hays grew up in Montana in the shadow of the Tobacco Root Mountains. In addition to his fiction work, he is a cowboy, a published poet and occasional food critic. Recently, he was nominated for Pushcart Prize for short fiction and not so recently for a Rhysling award for poetry. Clark brings a deep knowledge about the modern west, weaponry, country music and existentialism to his

Kathleen McFall grew up in the heart of Washington, D.C. She worked as a petroleum geologist and, later, as a journalist, and has published hundreds of articles about scientific research, energy and natural resources. An interest in the overlap of science and mysticism are an essential aspect of her fiction writing. She received an Oregon Literary Arts Fellowship for fiction.