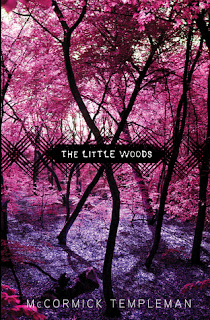 From Goodreads:
Are the woods behind St. Bede's Academy really haunted, or does bad stuff just happen there? When Calista Wood, a new student, arrives midway through her junior year, St. Bede's feels like a normal school . . . until she discovers that a girl had disappeared a couple of months earlier. Some kids think she ran away, others think she was murdered, but it's only when Cally starts digging around that she finds the startling truth.

Watch as Cally enters a world of privilege, weekend-long parties, high school romances, and... well-kept secrets. This page-turner will appeal to teens looking for a fast-paced thriller. Written in a voice at once gripping and crystal clear, debut novelist, McCormick Templeman, will take readers on a twisting and turning journey as only a "new girl" can experience.

My Review:
This book was pretty creepy! And yeah, it was also pretty awesome to read! I didn't enjoy it as much as I was hoping for, but it was still a pretty great book! It's just that something felt off in the way that it was written, like a glitch in a song, skipping over something.

The cover, for me, is both really pretty, and just a little bit plain. The colours are just so awesome, but there's only trees happening in it, even if it's a book called The Little Woods. So I'm conflicted on liking this cover or note!

These characters fit right into this book so perfectly, the author wrote them very well! Callie, the new kid, who has connections to the area in that her older sister disappeared-and the school offered Callie a position at the school to keep quite about it. All the rich, entitled kids with secrets. So great!

I really enjoyed the mystery that was at the heart of this book, it was totally creepy, and totally easy to see happening in real life. There were those disappearances, and nobody did anything, until Callie. And oh, how it wraps up was really excellent!

I just enjoyed this book a good deal, just not a really great deal!