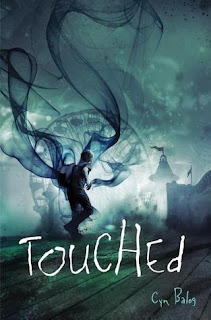 From Goodreads:
Nick Cross always listens to the voice in his head. Because if he doesn't? Things can go really, really wrong. Like the day he decided to go off script and saved a girl from being run over . . . and let another one drown. Trying to change the future doesn't work.

But this summer at the Jersey Shore, something's about to happen that Nick never could have predicted. He meets a girl named Taryn and finds out about the Book of Touch. Now the path that he thought he was on begins to shift . . . and there's no way to stop things from happening. Or is there?

In a life where there are no surprises, nothing has prepared Nick for what he's about to discover--or the choice he will be forced to make. . .

My Review:
Ooh, this was so good to read! I love to read, and this was a book, so yeah, that's kinda obvious! But I got this book early (even if I didn't read it early!) It was so interesting, with the power that Nick has, and how that's connected to Taryn and her family, and the Book of Touch. So awesome!

This world, with the powers that the people have, the more that we learn about it, well, so fascinating! I mean, people with power, well, yeah, the whole responsibility thing, and the corruption thing, it's usually more trouble then it's worth. Yeah.

Nick's particular power, in the voice that he hears, if he changes something, something of equal weight happens-save a girl from being hit by a car, and another one drowns. So yeah, that's not fun at all, and when he hears his own death, well, yeah, things get complicated!

How it ended, it was pretty sad. Things ended up pretty good, but there were sacrifices, and it was hard, and not easy. It happened, though, which is a good thing! But it is an ending that could make this a stand alone book, or the start of a series. I'm hoping for a series!

Such a fantastic book, and I can't wait to read more books by her!