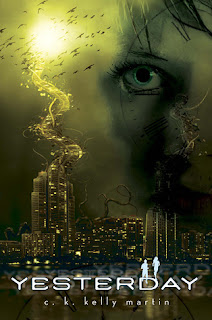 From Goodreads:
THEN: The formation of the UNA, the high threat of eco-terrorism, the mammoth rates of unemployment and subsequent escape into a world of virtual reality are things any student can read about in their 21st century textbooks and part of the normal background noise to Freya Kallas's life. Until that world starts to crumble.

NOW: It's 1985. Freya Kallas has just moved across the world and into a new life. On the outside, she fits in at her new high school, but Freya feels nothing but removed. Her mother blames it on the grief over her father's death, but how does that explain the headaches and why do her memories feel so foggy? When Freya lays eyes on Garren Lowe, she can't get him out of her head. She's sure that she knows him, despite his insistence that they've never met. As Freya follows her instincts and pushes towards hidden truths, the two of them unveil a strange and dangerous world where their days may be numbered. Unsure who to trust, Freya and Garren go on the run from powerful forces determined to tear them apart and keep them from discovering the truth about their shared pasts (and futures), her visions, and the time and place they really came from. Yesterday will appeal to fans of James Dashner's The Maze Runner, Veronica Roth's Divergent, Amy Ryan's Glow, Laini Taylor's Daughter of Smoke and Bone, and Ally Condie's Matched.

My Review:
This book, oh, wow! I wasn't expecting it, but it was so good! I loved the story, of the 1985 storyline, and then the 21st century storyline, and how they are connected, well, yeah, it was just so awesome to read it! And I'm so lucky to be able to read it early!

Yeah, the 21st century world, was not one that would be good to live in! Not good for anyone, it was pretty bad, and yeah, this whole book was about preventing all of that from happening. Because yeah, some people can try and do that! Which is why there's the two story lines!

There was some really incredible detail in this book! And that was just so great to read, it brought everything to life! Even if that life, those details, were not so good for the people living it! Their conflict is our enjoyment!

Loved how it ended, how everything came together, that was really awesome! A bit sad, that there was a version of her that had lost her version of Garren, and so goes back to help other versions of herself get through it. Sad, but she wins out in the end!

Really fantastic book, and I'd love to read more by C.K. Kelly Martin!