Week 36 Review: This is So Not Happening 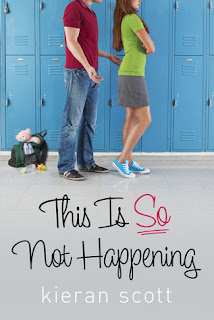 From Goodreads:
Just when Ally and Jake think they've finally got it together, things fall completely apart in this drama-filled conclusion to the He's So/She's So trilogy. After their long summer apart, Ally and Jake were hoping for a drama-free senior year. Instead they are faced with a turn of events that threaten to tear them apart...for good.

It turns out that Chloe is pregnant and says that Jake is the father. Hammond is pissed at his best friend, and he cannot believe that Ally would stay with Jake. But Ally's willingness to make it work is tested when Jake starts blowing her off to go to doctor's appointments with Chloe, and Ally joins the school play—and meets a cute guy.

As graduation approaches, new secrets come out and Ally realizes maybe Jake isn't the guy she thought he was. After everything they've been through, can Ally and Jake get out of Orchard Hill with their relationship intact?

The gossip-fueled action of She's So Dead to Us and He's So Not Worth It comes full circle in this can't-miss conclusion to a popular series.

My Review:
So pregnancy in teens is something that's gossiped about a lot. And so yeah, I think I had to expect it! And in this book, it just adds that extra gasoline to the fire. Especially with the ending of He's So Dead to Us! And yeah, this book plays off of that!

There was a lot of drama in this book, what with that baby, and the claim that Jake was the dad, and how that affected both Ally and Jake, but also Chloe, and Hammond, and all those relationships. I mean, a baby is a big responsibility, and as a teen? Big drama there!

These characters were their extreme, gossipy selves, they are teens, and popular ones, for the most part! And I just really enjoyed reading about them, for the last time, and I know I'm going to read more by Kieran Scott!

I enjoyed this book a lot. It's the last book in the series, and so yeah, a few things have lead to this book, and yeah, while we have to say goodbye in this book, we went out in style, and I just really enjoyed reading the ending to this series!

This was a really great book, a great ending to the series, and I just enjoyed it so much!