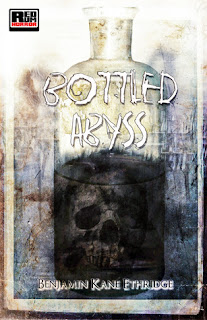 From Goodreads:
YOU'VE TAKEN PAYMENT FOR A DEATH THAT DOESN'T BELONG TO YOU. WHAT WERE THREE ARE NOW ONE, AND I AM FURY...

Herman and Janet Erikson are going through a crisis of grief and suffering after losing their daughter in a hit and run. They've given up on each other, they've given up on themselves. They are living day by day. One afternoon, to make a horrible situation worse, their dog goes missing in the coyote-infested badlands behind their property. Herman, resolved in preventing another tragedy, goes to find the dog, completely unaware he's on a hike to the River Styx, which according to Greek myth was the border between the Living World and the world of the Dead. Long ago the gods died and the River dried up, but a bottle containing its waters still remains in the badlands. What Herman discovers about the dark power contained in those waters will change his life forever...

My Review:
This was a very creepy, thrilling, and pretty darn scary book! My arms still have the goosebumps! And it was a compelling tale, and pretty darn unique with the dried out river Styx, and yeah, I really enjoyed this book!

I have to admit that the first few pages were a bit hard to get through, because while you do feel sorry about the death of their 2 year old daughter, they've pretty much let it ruin everything else left in their lives. But once past that part (and it is short) then it gets really, really good! That's where the creepy and the scary and the thrilling come from!

The ending is bittersweet, in that there are sacrifices, and not everybody makes it out, but it's still sad, and a little bit depressing, but it is horror, and it reminds me a little of the Forest of Hands and Teeth series by Carrie Ryan, in that the bad guy is most likely never going to be defeated, and that he's going to be a constant threat  and that you'll never be safe again. Which sucks. But it just makes us hope more that it never happens!

Yep, this was a really great book, I really enjoyed it, so I hope you guys check it out!! 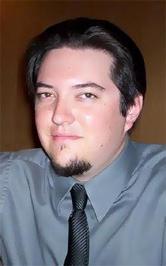 Bio:
Benjamin Kane Ethridge is the Bram Stoker Award winning author of the novel BLACK & ORANGE (Bad Moon Books 2010). For his master's thesis he wrote, "CAUSES OF UNEASE: The Rhetoric of Horror Fiction and Film." Available in an ivory tower near you. Benjamin lives in Southern California with his wife and two creatures who possess stunning resemblances to human children. When he isn't writing, reading, videogaming, Benjamin's defending California's waterways and sewers from pollution. 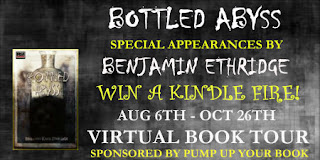 Stops on the Tour:
Monday, August 6
Guest blogging at Allvoices

Thursday, September 13
Interviewed at Pump Up Your Book

Tuesday, September 25
Guest blogging at Reviews From the Heart

Thursday, September 27
Book reviewed at Reviews From the Heart

Wednesday, October 17
Interviewed at I Am a Reader, Not a Writer