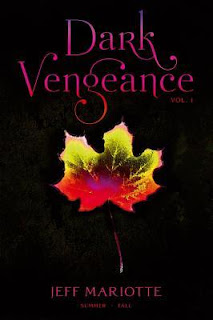 From Goodreads:
When a gorgeous stranger seeks refuge at Kerry's summer-share house, she knows her life is about to change. Daniel Blessing is mysterious and charismatic—and on the run from a powerful witch named Season. Kerry and her friends don't believe in witches and spells, but Kerry can't help believing Daniel…and falling for him. But falling for Daniel pulls her into a feud his family has been waging for generations. A dark feud of passion, magic, and revenge. Which means all of their lives are in serious danger. Because now Season wants Kerry and her friends dead, too.

My Review:
I enjoyed this book. Not as much as I thought I would, or at least, what I would've have thought had I thought about it, but it was still a pretty great bound collection of the first two books in this series! And wow, was that a long sentence! But I didn't know how it end it earlier!

So this is about witches, and people, and this world was one that I liked. It's just the writing, I think, that I didn't like as much. Something about it bugged me, what words were chosen, how things were phrased, how the characters were depicted. Yeah. I just had something of an issue with it!

There were a lot of deaths in this book. Of her friends, and people around them, because Season is a pretty dark witch, and is pretty much the cliche in that, in the method of her magic in hurting people. Which is not fun at all for her victims!

This series reminded me of the Witch series by Debbie Vigiue and Nancy Holder. Witches, friends and family, and just that I didn't enjoy them all that much. Sure, they're all pretty good books, but they weren't really great, you know?

I was planning on the bind of of the next 2 books, but after this one, well, that plan's probably not going to happen!