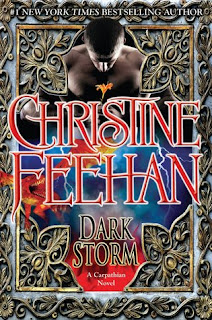 From Goodreads:
Awakening after all this time in a world of absolute darkness and oppressive heat, Dax wonders in how many ways the world above must have changed. But it is how he has changed that fills him with dread and loathing. Buried alive for hundreds of years in a volcano in the Carpathian Mountains, Dax fears that he has become the full-fledged abomination that every Carpathian male fears, a victim of the insidious evil that has crept relentlessly into his mind and body over the centuries. But there are some things that never change.

His name is Mitro, the vampire Dax had hunted all these long centuries. Second in command to the prince of the Carpathian people he is the epitome of everything malevolent, and perpetrator of one of the most shocking killing sprees known to man - and beast. Even his friends and family weren't safe from Mitro's bloodlust. Neither was Mitro's lifemate, Arabejila, an extraordinary woman with extraordinary gifts. But now that Dax has re-emerged, so too has Mitro. The ultimate battle between good and evil has been re-engaged. Between Dax and Mitro, a violent game has begun - one that has marked Riley Parker, the last descendent of Arabejila, as the reward.

My Review:
Oh, I really enjoyed this book! It's another great instalment in this series that I love, and yeah, it's a pretty significant one, in terms of developments. Like Mitro Daratrazanoff, though I'm not sure how he's connected to Gregori, Gabriel and Lucian, and those other Daratrazanoff's in this series! *Note, that later, I was told that Mitro is the brother of this generation of Daratrazanoff's dad. Yeah.*

So yeah, this was a really fantastic book, and there weren't a lot of Carpathians besides Dax, whose family/last name we didn't get, but oh, well. We got Gary, and yeah, that was really great, having that connection!

Riley, she was awesome! Her mom is dying, but they're doing this trip that they've been doing forever, one that's pretty important. But they're too late, and Mitro gets free-but so does Dax. So there's a bright side!

My only compliant, which is a two parter, is that I wish that two things were bigger-when Mitro is told that Riley is a descendent of Arabejila, Mitro's lifemate that he abandoned to become a vampire, and when they beat Mitro. Both things were over too quickly, I wanted more time there!

This was a really fantastic book-I loved Dax's sense of humour-and yeah, I can't wait for more books in this series!