Week 42 Review: In the Arms of Stone Angels 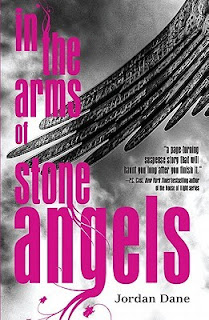 From Goodreads:
Two years ago I did a terrible thing. I accused my best friend of being a killer after seeing him kneeling over a girl's body. That moment and that outcast boy still haunt me.

Now my mom is forcing me back to Oklahoma and I can't get White Bird out of my mind. But when I find out he's not in juvie—that he's in a mental hospital, locked in his tormented brain at the worst moment of his life—I can't turn my back on him again.

No one wants me to see him. My mom doesn't trust me. The town sheriff still thinks I was involved in the murder. And the other kids who knew the dead girl are after me.

I'm as trapped as White Bird. And when I touch him, I get sucked into his living hell, a vision quest of horrifying demons and illusions of that night. Everything about him scares me now, but I have to do something. This time I can't be a coward. This time I have to be his friend.

My Review:
It was really great to read this book! She knew she made a mistake, but this book showed her how she could fix it. Because White Bird didn't kill the girl. He just tried to save her. And the mystery of who killed her was a part of it, because it was also linked to saving White Bird from his own brain!

This book was mystical, what with White Bird's condition, and the way that the girl was killed, because that was not normal! So there was good mystical, and then there was bad mystical. Most of this book was trying to go from the latter to the former!

What I got out of this book, was that it was one about outsiders. Those people that don't fit into society like society wants them to, so they exclude them. Which I fit into quite nicely, since I also like to reject society to read!

The mystery in this book, was really fantastic, and when we find out who actually killed the girl, well, that was a bit of a oh, how could we have missed that moment! Of course the popular kids did it, they're like that!