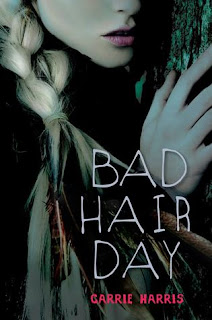 Kate Grable is geeked out to shadow the county medical examiner as part of her school's pre-med program. Except when he's arrested for murder, she's left with the bodies. And when Kate's brother Jonah stumbles upon a dead gamer girl, she realizes that the zombie epidemic she cured last fall was only the beginning of the weirdness taking over her town. Someone's murdering kids—something really hairy. And strong. Possibly with claws.

Is it werewolf awesomeness like Jonah and his dorktastic friends think? Kate's supposed to be a butt-kicking zombie killing genius...but if she can't figure out who's behind the freakish attacks, the victims—or what's left of them—are going to keep piling up.

It's scary. It's twisted. It's sick. It's high school.

My Review:
Man, I'm so glad that this is a series. Because it was so awesome to be in this world again, with these characters, watching Kate tackle another possible paranormal creature! And it was just so funny! The last line of the synopsis should prove that-it makes me laugh every time!

So Kate's gotten a bit of fame after the events of the last book. Which lead her to an intern-ship thing. Except that her boss is arrested, and there's bodies, and so Kate's up to the task, but she's wondering if she's capable. Of course we know she is!

I really, really enjoyed the mix of the science and the monsters again, it's just something that I don't think will really truly get old. After all, monster stories have been around for centuries, and science, well, adds a new and modern take on it!

I would really love a 3rd book. And more monsters! I read the 1.5 novel, Bad Yeti, which gave Jonah a leading role, but it would be really so fantastic to have a 3rd book, more monsters, and more things for Kate to solve! that would be so great, but I don't have my hopes up!

I enjoyed this book, so, so, much! So lucky to be able to read it early! Can't wait to read more by Carrie Harris!