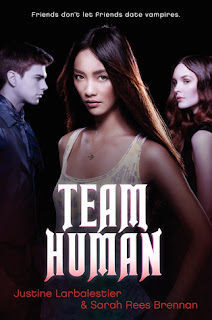 From Goodreads:
Just because Mel lives in New Whitby, a city founded by vampires, doesn't mean she knows any of the blood-drinking undead personally. They stay in their part of town; she says in hers. Until the day a vampire shows up at her high school. Worse yet, her best friend, Cathy, seems to be falling in love with him. It's up to Mel to save Cathy from a mistake she might regret for all eternity!

On top of trying to help Cathy (whether she wants it or not), Mel is investigating a mysterious disappearance for another friend and discovering the attractions of a certain vampire wannabe. Combine all this with a cranky vampire cop, a number of unlikely romantic entanglements, and the occasional zombie, and soon Mel is hip-deep in an adventure that is equal parts hilarious and touching.

Acclaimed authors Justine Larbalestier and Sarah Rees Brennan team up to create a witty and poignant story of cool vampires, warm friendships, and the changes that test the bonds of love.

My Review:
This was such a hilarious, awesome book! I loved reading it so much, loved the world, the writing, the characters, the plot, just the whole darn book! It was just that darned good! I'm so happy that I picked it up at the library!

So the way that the town is set up, half the town for the vampires, half for humans, though there is some mixing, because yeah, this town was built by vampires, and the way people feel about vampires is pretty split, yeah, there's some tension there!

I loved all the elements of this book! Like the humour and the wit, the mystery, the romance, and the politics between humans and vampires. Oh, and the magical people, seeing as who was the bad guy, and what they were doing!

I think the ending was pretty darn satisfying! Things resolved quite nicely, and reading that was really entertaining! And while things wrapped up pretty well, I would really love a sequel! Because I enjoyed this world so much! Or a companion book! I'm not picky with books!

I enjoyed this book to the max, and Justine Larbaiestier and Sarah Rees Brennan are authors I'm going to have to look for now!