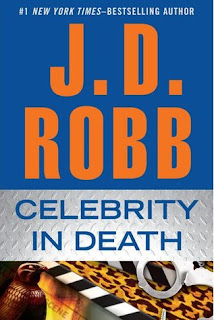 From Goodreads:
Lieutenant Eve Dallas is no party girl, but she's managing to have a reasonably good time at the celebrity-packed bash celebrating The Icove Agenda, a film based on one of her famous cases. It's a little spooky seeing the actress playing her, who looks almost like her long-lost twin. Not as unsettling, though, as seeing the actress who plays Peabody drowned in the lap pool on the roof of the director's luxury building. Now she's at the center of a crime scene-and Eve is more than ready to get out of her high heels and strap on her holster and step into the role she was born to play: cop.

My Review:
Loved reading this book! It's just such a fantastic series! And this was a great instalment, because it's about the movie based on the book based on the case in the book Origin in Death. So it's been a story line that be's ongoing for a while! And it was just fantastic!

Because of course someone participating in making the movie is killed! And because this is the future, with more advanced technology-they had the dead girl looking like Peabody. Which was pretty creepy for those that were dealing with the body!

So there a few things that get repetitive in this series. Like Eve taking showers that are more likely to burn the skin. Or Eve having a dream or dreams that help her solve the case, making connections she couldn't making in her waking moments. And this book had neither, so yeah, it was really great!

Finding  out who the bad guy was, well, yeah, it was pretty great, though it was a bit hard, seeing as that most people didn't like her, and were a bit relieved that she was dead and couldn't bug them anymore. But Eve and her team find out, and yeah, that's great!

I really enjoyed this book, great edition to this series, and yeah, I can't wait for mroe!