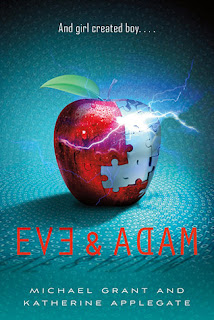 From Goodreads:
And girl created boy…

In the beginning, there was an apple—

And then there was a car crash, a horrible injury, and a hospital. But before Evening Spiker’s head clears a strange boy named Solo is rushing her to her mother’s research facility. There, under the best care available, Eve is left alone to heal.

Just when Eve thinks she will die—not from her injuries, but from boredom—her mother gives her a special project: Create the perfect boy.

Using an amazingly detailed simulation, Eve starts building a boy from the ground up. Eve is creating Adam. And he will be just perfect... won’t he?

My Review:
What can I say about this book? I enjoyed reading it, that it was a pleasurable one, at that? That I really loved these characters, this story, and half hope, half dread, that there be a sequel, but a prequel, that wouldn't be too bad!

First off, I must say, that I really loved this cover! It's so pretty, and it takes that Adam and Eve, the Garden of Eve and the apple, and turns it on it's head, that Eve created Adam, and instead of God, it's science, and yeah, it's a wonderful cover in a trend of really amazing covers that I hope continues because it's so beautiful!

I loved these characters, at points, it was so funny, because Adam, he was created, and he had to learn to be human and alive, not slowly over years like everyone else, but basically all at once, and some of his reactions to things, was just so original, because we're used to these kinds of things, and he wasn't.

I really felt bad for Aislin, for what her boyfriend was, and how he treated her, poor judgement doesn't mean that someone should have done what was done to Aislin. So yeah, that made me really dislike, to the point of hating, Maddox.

That Eve has decide between Adam, the boy that she created to be perfect (though just as a program, not real, instead of what happened, but he is there) or Solo, a guy who has his flaws, namely, that he wants revenge on her mom for his family's deaths. Yeah.

I really, really enjoyed this book, it was really amazing!