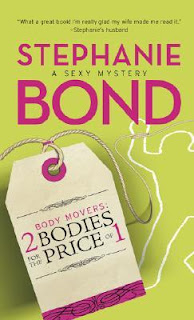 From Goodreads:
With fugitive parents, a brother dodging loan sharks, a hunky cop who's made her outlaw family his business, and her ex-fiance back in the picture, Carlotta Wren thought her life couldn't get any more complicated. And then... Her fugitive parents phone home.

Her identity is stolen by a look-alike.

Her look-alike is found, well...dead.

Under suspicion for murder, Carlotta discovers that her devious double might have been bumped off accidentally--and that she could be the real target. Throw in dealing with her motley crew of family, friends and wannabe lovers, and Carlotta begins to think that jail isn't such a bad alternative after all...

My Review:
And the adventure continues! Carlotta, her brother, and her potential boyfriends, and the murder mystery, yeah, everything was just so captivating, and it was one heck of a roller coaster ride! I can't wait to get to the next book!

First there was the identity theft, and all the problems that caused. And then the death of the lady that assumed Carlotta's identity. Oh, and then there was what her brother was getting up to, which is going to cause a lot of trouble!

I think that it all came together very well! All the bits and clues, and the off hand comments, to find who the bad guy was! And when a mystery book does it well, it comes with a "I couldn't have figured this out!" kind of feeling, and this book had it!

Who the bad guy is, who stole the identities, and then sold them to other people, and killed his customers, well, it sucks who it is. Because he was her friend, and yet he did this to her. And that whole situation sucks so much!

I loved reading this book again, it's just so fantastic, and I can't wait to keep going on with the series!