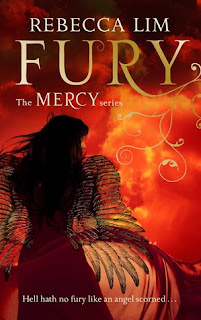 From Goodreads:
Hell hath no fury like an angel scorned…

Everything that has happened to Mercy over millennia has made her who she is. Now she and The Eight wage open war with Luc and his demons, and the earth is their battlefield.

Ryan’s love for Mercy is more powerful than ever, her guiding light in the hour of darkness. But the very love that sustains her, now places Ryan in mortal danger.

My Review:
I loved this book so much! It was such a great ending to the series! I was just so utterly captivated by it. And while I'm sad to say goodbye, they've won their battles and it's time for them to rest.

So Mercy is understandably after the ending of Muse. She knows what's going on, and now she wants to really do something about it. So this book had the most travel, and the mist new characters, of the series!

So I've liked Ryan more than Luc the entire series, and Muse justified that. And yeah, this book with them together was just so freaking good! And as a bonus, the final battle took place not too far from his home, bringing things, for us, in full circle.

One thing I'm confused over, which is the first angel she saved. What went on there? Did she die, or did she go to another plane like the next two angels Mercy rescued? I'm wondering about that!

This was such a great book, such a great end to the series, and I can't wait to read what Rebecca Lim writes next!