Week 42 Review: Dead as a Doornail 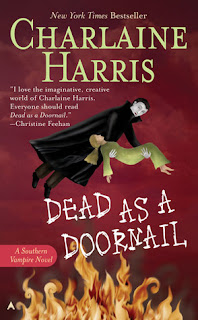 From Goodreads:
Small-town cocktail waitress Sookie Stackhouse has had more than her share of experience with the supernatural—but now it's really hitting close to home. When Sookie sees her brother Jason's eyes start to change, she knows he's about to turn into a were-panther for the first time—a transformation he embraces more readily than most shapeshifters she knows. But her concern becomes cold fear when a sniper sets his deadly sights on the local changeling population, and Jason's new panther brethren suspect he may be the shooter. Now, Sookie has until the next full moon to find out who’s behind the attacks—unless the killer decides to find her first…

My Review:
Ah, this series! I'm really getting into it, though for me, while this book was really great and all, it's probably one of the lower ones of the series, because for some reason, I didn't enjoy it as much as I have previous books. And I don't know the reason, which sucks!

I just really enjoy the characters of this series, like I mentioned in my review of the last book, characters and learning new things about them each book, and their bonding experiences, are part of the glue that holds bigger series together, and wow, the experiences in this book!

Plus there' some new characters, like the fairies Claudine and Claude, who were pretty weird and interesting! And also, Quinn, a were, who referees were events like packmaster things, the big thing that decides who takes the position.

And yeah, there's the thing with the shooter of weres, and Jason being the prime suspect in the eyes of the weres, even though he's recently become one, himself, or maybe because of it. But yeah, that mystery was really great to read!

Such an enjoyable book, but yeah, still don't know why I think I have a 3.5 chance of rereading it!