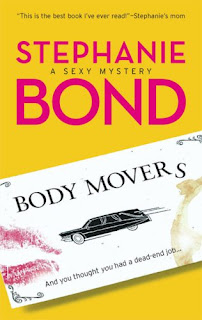 From Goodreads:
So Carlotta Wren's life hasn't turned out as she'd planned. She didn't plan for her parents to skip bail for a white-collar crime, leaving her to raise her brother. She didn't plan on having the silver spoon ripped from her mouth and forgoing college to work retail. She didn't plan on her blue-blood fiance dumping her. And she didn't plan on still being single ten years later, working at Neiman Marcus, with no idea where her fugitive parents are. But she's coping. Until-- --her lovable brother is arrested, and the hunky cop decides to reopen her parents' case.

--her brother becomes a body mover for the morgue, and his sexy boss gets Carlotta involved.

With three men in her life, Carlotta has added motivation to help bag a murderer to keep her own well-dressed body from being next on the list.

My Review:
Man, this was such a great book to reread! It's just so hilarious and full of awesome! A series about a body mover for the morgue, a murder mystery, and then the romantic entanglements that start in this book, and just get more complicated as the series goes on!

So after a easy childhood, and pretty easy teenage years, Carlotta's adult life has been pretty much the hardest. Her parents on the run from the law, having to raise her little brother, and worry about the money, yeah, you have to feel for her!

I loved the romance, because I know how complicated it's going to be. Because there are the 3 guys-Cooper, her brother's boss, Jack, the cop who arrested her brother and reopened her parents case, and then her ex-fiancé. Yeah. Two new guys, and a old one with history. Choices!

I really enjoyed the mystery, because Carlotta is the suspect in the case, and then she's helping with the body mover business, well, that's a lot going on in one person's place! But Carlotta does a pretty great job with that, she's kinda gotten used to that!

I really loved reading this book again, and I can't wait to continue through the series again!