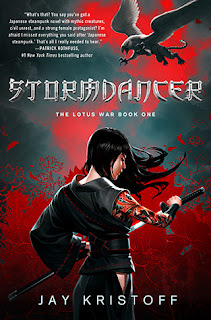 From Goodreads:
Griffins are supposed to be extinct. So when Yukiko and her warrior father Masaru are sent to capture one for the Shogun, they fear that their lives are over. Everyone knows what happens to those who fail him, no matter how hopeless the task.

But the mission proves far less impossible, and far more deadly, than anyone expects – and soon Yukiko finds herself stranded: a young woman alone in her country's last wilderness, with only a furious, crippled griffin for company. But trapped together in the forest, Yukiko and Buruu soon discover a friendship that neither of them expected.

Meanwhile, the country around them verges on the brink of collapse. A toxic fuel is slowly choking the land; the omnipotent, machine-powered Lotus Guild is publicly burning those they deem Impure; and the Shogun cares about nothing but his own dominion. Yukiko has always been uneasy in the shadow of power, when she learns the awful truth of what the Shogun has done, both to her country and to her own family she's determined to do something about it.

Returning to the city, Yukiko and Buruu plan to make the Shogun pay for his crimes – but what can one girl and a flightless griffin do against the might of an empire?

My Review:
Oh, man, I loved reading this book! Such a great world, such wonderful characters, and just so much going on! There were parts that it was a bit hard to keep track of what was going on, and others where it was really hard to tear me away from the pages, I was so hooked!

There were a ton of twists in this book! The one for the characters, that griffins still exist, is a pretty important one, seeing as it's why Yukiko plans what she plans, and the whole relationship between her and Buruu, which was really great to read about!

In the beginning, it was a bit hard to read this book. And then Buruu was in this book, and everything was so much better! Buruu just saved this book, well, not really saved it, but brought it so much higher! So awesome!

When things started to come together, and those twists closer and closer, and Buruu being his awesome self, yeah, that just was incredible! It made for such an epic ending, and I just really would love the next book now!

I enjoyed this book so much, it was a really great DAC books, and I expect and hope for more books like this from Jay Kristoff!