Week 41 Review: Dead to the World 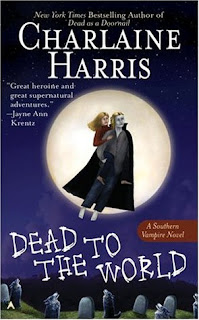 From Goodreads:
In Sookie Stackhouse—a Southern cocktail waitress with a supernatural gift—Harris has a created a heroine like few others, and a series that puts the bite back in vampire fiction. Now the hit series launches into hardcover for Sookie's biggest twist-filled adventure yet. When cocktail waitress Sookie Stackhouse sees a naked man on the side of the road, she doesn't just drive on by. Turns out the poor thing hasn't a clue who he is, but Sookie does. It's Eric the vampire—but now he's a kinder, gentler Eric. And a scared Eric, because whoever took his memory now wants his life.

My Review:
This was just such a fantastic book! I'm really getting into this series, I'm going to have to check out the rest of the series, I've just been meandering about on this series, now to really start reading it! Because it's just so good and enjoyable!

Just the idea that Eric had his memory erased, well, just that bit funny! I enjoyed that a lot, because it was a big part of the book, dealing with the memory loss, and Eric having it, and who did it to him and why! Such conflict!

So after the disaster that was the relationship between Sookie and Bill, well, you'd almost thing that Sookie wouldn't consider relationship with another vampire. But this new Eric, well, he's pretty nice and sweet, and the old Eric isn't too bad. But anyways!

Loved the mystery and the romance in this book, with Sookie being Sookie, and all the developments in these characters we're getting to know, book by book! These connections, they're a big part, I think, of what makes bigger series like this one work!

Such a great, wonderful book, now I need to read more!