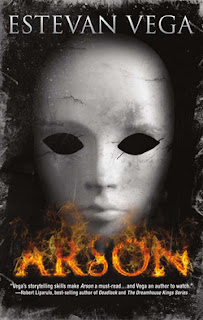 From Goodreads:
ARSON GABLE FEELS LIKE A FREAK. HE CAN CREATE FIRE. HE NEVER ASKED FOR IT. HE NEVER WANTED IT. BUT HE CAN'T SHUT IT OFF.

Before now, three things were true: he both loved and despised his grandmother; his life was going nowhere; and he was alone. But when a strange girl--who feels more normal behind a mask than inside her own skin--moves in next door, Arson hopes to find something he's never had: purpose. After years of living in fear, he will be forced to confront his haunting past and embrace the unknown as he walks the fine line between boy and monster. Edgy, realistic, and breathtaking, Arson, the chilling chronicle of an isolated teenager with unimaginable ability, is set to ignite the hearts and minds of a new generation.

My Review:
Fire, in the ancient world, was one of the four elements. Course, we know better now, but it's still sometime to think about, it can keep us warm, but it can also destroy, and that Arson has this ability, was really fascinating to read about!

Arson's had a pretty difficult life, he lives with his grandmother, and there's a not good for him reason why he does that. And what with his power, well, that just complicates his life. And then Emery came, and things changed!

I enjoyed the relationship between Arson and Emery (side note, who names their kid Arson? It's a horrible name for a kid, even if he has the ability of fire!) Because they're different, and watching them interact with that, was so great!

But oh, boy, that ending! That is a cliffhanger, and a pretty horrible one! But I get to read Ashes next, pretty much right away, so I won't have to wait long to see what's going to happen to them, now that they've been taken!

This was a really great book, and I'm so glad that I had a chance to read this book because I'm reviewing the second book for a review tour!