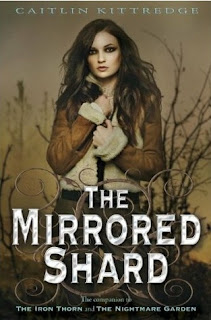 From Goodreads:
Aoife Grayson must face death to win back Dean—the love who was ripped from the Iron Lands of the living when he was shot in the arctic north. But getting to the Deadlands is something that Aoife can't do on her own. And if she can find a way there, Tremaine would surely never allow it. He has sworn to keep her in the Thorn Lands, the fairie home of her mother, Nerissa. But Aoife is determined to find her way out. And she has no trouble if that means she has to kill Tremain and his queen to do it.

My Review:
Gah, this was a really fantastic book! I've enjoyed this whole series, and while I'm sad to say goodbye, this was a heck of a good book to send us-and Aoife and gang-off! So good! So entertaining! So much going on!

So first off, I just want to say, I know where the titles for the first two books come from, from the world, and what was going in each respective book. But for this one, I didn't read a reference to mirrors, broken or otherwise that I remember. Unless I read it too fast. Yeah.

Now, this book dealt with two big things-bringing Dean back from the Deadlands, and then dealing with the can of worms she opened during her time in the Arctic, with what she woke up. And they have about equal time dealing with them!

Really great ending! She beat that big old nasty old one, locked him up, so it's pretty assured that the rest of the old ones aren't going to misbehave. And she got Dean back! So yeah, lots of good things going on!

I enjoyed this book so much, it was just so good, and a great ending to a great series, I'm sad to say goodbye, but there's always rereading!