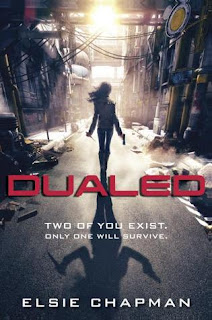 From Goodreads:
You or your Alt? Only one will survive.

The city of Kersh is a safe haven, but the price of safety is high. Everyone has a genetic Alternate—a twin raised by another family—and citizens must prove their worth by eliminating their Alts before their twentieth birthday. Survival means advanced schooling, a good job, marriage—life.

Fifteen-year-old West Grayer has trained as a fighter, preparing for the day when her assignment arrives and she will have one month to hunt down and kill her Alt. But then a tragic misstep shakes West's confidence. Stricken with grief and guilt, she's no longer certain that she's the best version of herself, the version worthy of a future. If she is to have any chance of winning, she must stop running not only from her Alt, but also from love . . . though both have the power to destroy her.

Elsie Chapman's suspenseful YA debut weaves unexpected romance into a novel full of fast-paced action and thought-provoking philosophy. When the story ends, discussions will begin about this future society where every adult is a murderer and every child knows there is another out there who just might be better.

My Review:
This was a really fantastic book! Pretty darned bleak and dark, but a look at what our lives could be like in the future. And it's a pretty terrifying look!And I'm so glad that I had a chance to read it early (even if I didn't take that chance, bad me!) because it was just so great!

So the idea that there's two genetic copies of West, her and her Alt, that basically, she has to kill another version of herself-or be killed by herself, well, that's a tough situation to be in! And the idea of killing another version of you makes you stronger is a very singular idea of thinking, that killing people is strong. It's only one kind of strength, not others!

So West lost her brother, the one that she grew up with, to his Alt, and all the feelings there, and then her brother's friend, and all that stuff there, that was a really complicated, emotional time! So it's a no brainer that West puts off facing off with her Alt until the end of the month that she has!

I'm really glad that this is a series for a few reasons. More time in the world, with the characters, of course. To see West after all this, because it was a pretty traumatic experience! And then, to hopefully get some history, of why their town is the way it is, and how it got there!

Man, this was a really great book, and I can't wait for the sequel!