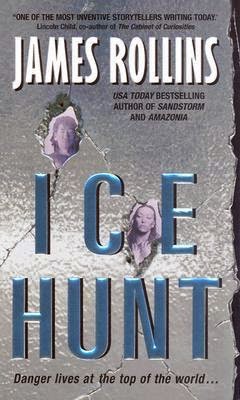 From Goodreads:
Carved into a moving island of ice twice the size of the United States, Ice Station Grendel has been abandoned for more than seventy years. The twisted brainchild of the finest minds of the former Soviet Union, it was designed to be inaccessible and virtually invisible. But an American undersea research vessel has inadvertently pulled too close—and something has been sighted moving inside the allegedly deserted facility, something whose survival defies every natural law. And now, as scientists, soldiers, intelligence operatives, and unsuspecting civilians are drawn into Grendel's lethal vortex, the most extreme measures possible will be undertaken to protect its dark mysteries—because the terrible truths locked behind submerged walls of ice and steel could end human life on Earth.

My Review:
I really enjoyed rereading this book! There's so much action, and so much going on, it was just so good! I enjoyed the relationship between the two couples, even though most of the time they're not together. And the back and forth, this or that, escape and return, just so awesome!

This book is a thriller. No doubt about that-the feeling like, nowhere's safe, that the enemy will just keep coming and coming, and no matter how far you go, how long you run, there's just going to be danger around the corner-this book had it in spades!

The fact that the Grendel's are the way they are, they were just so interesting, though terrifying! Between that, the Russians, and unfortunately for everyone, the Americans, just kept the threats coming and going, and just racketing up that tension!

I remembered that there was a betrayal in this book near the end, but I thought that it was a scientist. It wasn't. It was Craig, who had gone from a reporter, to the lead of a group of specialised American soldiers. So yeah, sucked that it turned out that he was a bad guy!

Such a great book, loved rereading it, it was just so entertaining, and the ending was in turns sweet and great, and chilling! So good!