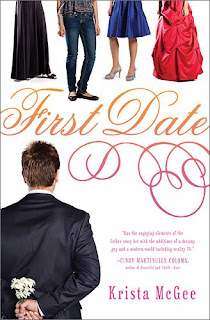 From Goodreads:
Addy Davidson discovers God's unexpected plans for her life when a reality TV show turns her quiet existence on its head.

The orphaned daughter of missionaries, Addy is quite content to stay in the shadows and never draw attention to herself. But when she's selected for a reality TV show to try to become the President son's prom date-a show she didn't audition for-she's suddenly in America's spotlight.

The lights, the make-up, the competitions, and the blogs discussing every move she makes all make Addy incredibly uncomfortable. But through her time at The Mansion, Addy comes to realize that first impressions aren't always right, that hiding out may not be what God had planned for her life, and that her faith should affect everything she does. It may just be that her selection wasn't random at all and that she's on this show "for such a time as this."
My Review:
This was a really great book! It was funny, and fun, cute, adorable, and yeah, it has religion in it, because of the beliefs of Addy, and God is a major part of the book, but I don't think it's too overdone for those that don't like religion, because the message is forgiveness and peace. And who doesn't want that, besides the bad guys?

I just loved this whole idea, of the First Son having a competition as to who will be his date to the prom, and all the activities that they did, it was kinda pretty hilarious, and yeah, they got to travel to New York, and they got to have a special date just alone with Jonathan, that was sweet, that she brought the one guy with them.

I especially loved the visit home, and how it turned out that Jonathan got his mom to renovate her and her uncle's house, that was just awesome, that his mom noticed, and was told, about Jonathan's genuine romantic interest in Addy.

Yeah, this was a really great book, and one that I really enjoyed!