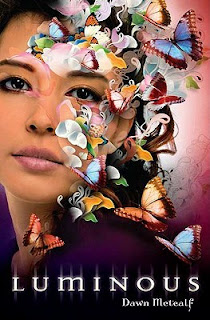 From Goodreads:
As reality slips and time stands still, Consuela finds herself thrust into the world of the Flow. Removed from all she loves into this shifting world overlapping our own, Consuela quickly discovers she has the power to step out of her earthly skin and cloak herself in new ones-skins made from the world around her, crafted from water, fire, air. She is joined by other teens with extraordinary abilities, bound together to safeguard a world they can affect, but where they no longer belong.

When murder threatens to undo the Flow, the Watcher charges Consuela and elusive, attractive V to stop the killer. But the psychopath who threatens her new world may also hold the only key to Consuela's way home.

My Review:
This was such a great book! Really great and unique, I enjoyed it a lot, Consuela was a character that I wanted to get to know more of! And this world of the Flow, and yeah, Consuela's specific power, which ties into the cover so well! Loved that!

So this book was pretty confusing. When I was going for details, another bit of a review popped out at me, that it was like whole chapters were ripped out. And that's how I felt, too, because things were disjointed, slightly connected, but mostly not.

But that this pretty awesome world is effected by murder, because I guess since they were human once, or they still are, but are different, well, they still have our tendency, that if we can do something wrong, we will (which is not how the actual thing goes, but it's similar!)

Really enjoyed this book, weirdness and all!