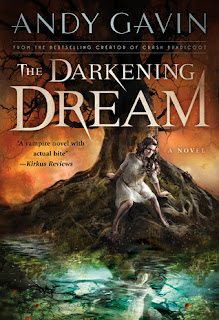 From Goodreads:
The Darkening Dream is the chilling new dark fantasy novel by Andy Gavin, creator of Crash Bandicoot and Jak & Daxter.

Even as the modern world pushes the supernatural aside in favor of science and steel, the old ways remain. God, demon, monster, and sorcerer alike plot to regain what was theirs.

1913, Salem, Massachusetts – Sarah Engelmann’s life is full of friends, books, and avoiding the pressure to choose a husband, until an ominous vision and the haunting call of an otherworldly trumpet shake her. When she stumbles across a gruesome corpse, she fears that her vision was more of a premonition. And when she sees the murdered boy moving through the crowd at an amusement park, Sarah is thrust into a dark battle she does not understand.

With the help of Alex, an attractive Greek immigrant who knows a startling amount about the undead, Sarah sets out to uncover the truth. Their quest takes them to the factory mills of Salem, on a midnight boat ride to spy on an eerie coastal lair, and back, unexpectedly, to their own homes. What can Alex’s elderly, vampire-hunting grandfather and Sarah’s own rabbi father tell them? And what do Sarah’s continuing visions reveal?

No less than Gabriel’s Trumpet, the tool that will announce the End of Days, is at stake, and the forces that have banded to recover it include a 900 year-old vampire, a trio of disgruntled Egyptian gods, and a demon-loving Puritan minister. At the center of this swirling cast is Sarah, who must fight a millennia-old battle against unspeakable forces, knowing the ultimate prize might be herself.

My Review:
This was a fantastic book. Just fantastic, the characters were smart, the plot had so many twists and turns, and we got to learn a few things, from life during 1913, religion, and language, and that was just incredible to read!

Sarah is smart, strong, and a bit headstrong, especially when things go wrong, like when they were trying to help the twin's younger sister. And again, she's really smart, she knows a lot of languages, and history, I don't know how she keeps it all in her head! And she was real, she had her friends, and she developed a love interest in Alex.

Alex, well, he's had a bit of a tough life, his parents dying young, and leaving him in the care of his Grandfather, who is very peculiar, and he's just moved to another country, and he hasn't really made any friends until he meets up with Sarah's group. And then everything goes to hell in a hand basket, with a dead boy, and a every increasing mystery on what to do to stop the bad guys, whom they know by sight and name, to varying degrees.

The action in this book was astounding, considering that the guns weren't really automatic ones, like with Alex, his horse, and the vampire, trying to get to safety, that was an amazing scene, even if there was hurt and loss, it was extremely important, in that it was the first big show of power against them.

And we got to see bits and pieces from the bad guys perspectives, perspectives that were interesting, and kinda understandable, if not acceptable, from power, to knowledge, and force.Combine that with all the different elements in this book, like mentioned, a vampire hunter, 3 Egyptian gods, and Vampires, all mixed together, it was a fantastic read!

Yeah, this was just so great to read, very enjoyable, very fast, and the way it ended, well, I really want a sequel, because there will definitely be consequences to what happened at the end, something that I really, really want to read about! Yep, so check this book out!

Author: Andy Gavin
Read: May 23rd, 2012
Source: Author for Review
Reason Why: It sounded really amazing, the cover's so pretty, he's the creator of Jak and Daxter, my favourite PS2 game series, and it's a YAHFC book, and a WTC book!
Publisher: Mascherato Publishing
Published: December 22nd 2011