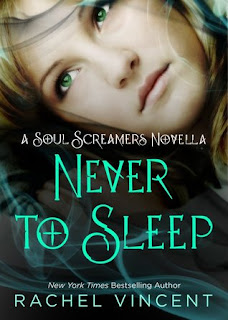 From Goodreads:
Don't Close Your Eyes.

Sophie Cavanaugh is not going to let her freak of a cousin's strange psychiatric condition ruin high school for them both. Not after all the work she's put into cultivating the right look, and friends, and reputation. But then, Sophie sees something so frightening she lets out a blood-curdling scream—and finds herself stuck in a bizarre parallel world where nothing is safe and deadly creatures lurk just out of sight, waiting for her to close her eyes and sleep...forever.

Could this world be real? Or does insanity run in the family...?

My Review:
This was such a great novella! I love this series, and yeah, it was awesome to have Sophie's POV, since she's the cousin of Kaylee, and has been in most, if not all, of the previous books. And after this, I'm pretty sure that she's going to be in the last two!

So Sophie's coming into her banshee powers, when they weren't totally sure that she'd have any, so yeah, that was really fantastic! And then when she accidentally uses them for the first time, and takes herself and Luca over? Yeah, not a fun time!

But, oh, that thing that they found out? That's a game changer! A small one, but it's going to change things, and I can't wait to read how it's going to do that, it's going to be really great, since the series is gearing up for the ending!

Really enjoyed being in Sophie's POV, now really can't wait for Before I Wake!