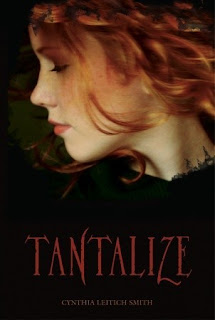 From Goodreads:
Are you predator or prey?

Quincie Morris has never felt more alone. Her parents are dead, and her hybrid-werewolf first love is threatening to embark on a rite of passage that will separate them forever. Then, as she and her uncle are about to unveil their hot vampire-themed restaurant, a brutal murder leaves them scrambling for a chef. Can Quincie transform their new hire into a culinary Dark Lord before opening night? Can he wow the crowd in his fake fangs, cheap cape, and red contact lenses — or is there more to this earnest face than meets the eye? As human and preternatural forces clash, a deadly love triangle forms, and the line between predator and prey begins to blur. Who’s playing whom? And how long can Quincie play along before she loses everything? TANTALIZE marks Cynthia Leitich Smith's delicious debut as a preeminent author of dark fantasy.

My Review:
This book was a bit weird. I enjoyed reading it, but it was weird! And a bit confusing, but once there was the transition, things made a lot more sense! Because it felt like there was another world layered over-top of this one, and yeah, that transition got Quincie-and us-into it!

I really enjoyed this world of vampires and werewolves-like her best friend, Kieran, who was the best friend who didn't see that she wanted more (and who also wanted more, but didn't act on it, because boys are silly) and yeah, Quincie's role in it becomes personal with the new chef!

Oh, from the turning, things made much more sense, and Quncie adjusts pretty quickly! And then she takes control, which was really great! And then when she's put into a terrible position in drinking Kieran-she doesn't kill him. So yeah, that was really great! Since the bad guy thought she would!

So good, so entertaining, and I can't wait to read more!