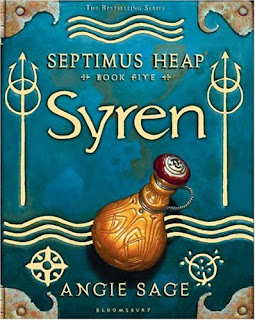 "It is Nicko's first night out of the House of Foryx, and Jenna thinks he is going a little crazy. Some hours previously, on Nicko's insistence, Septimus and Spit Fyre took Jenna, Nicko, Snorri, Ullr and Beetlye to the Trading Post-a long string of harbors on the edge of the land where the House of Forzy lies hidden. Nicko had been desperate to see the sea once more, and no one, not even Marcia, felt able to refuse. Septimus objected a little more than anyone else. He knew his dragon was tired after the long flight from the Castle to the House of Foryx, and they both faced a long journey home with the dangerously ill Ephaniah Grebe. -Syren by Angie Sage 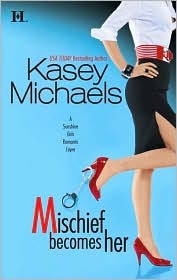 "'Jess? Heads up there, kiddo. We're back to you in five...' Kevin Mulhally held up his right hand and went silent for the rest of the count. Four, three, two, one... Jessica Sunshine, her professional stone face in place, waited a single heartbeat after the produceer pointed a finger at her and then smiled into the camera as if delighted to see her cable TV audience." -Mischief Becomes Her by Kasey Michaels

I'm enjoying these books! They're really awesome! What about you guys? Happy reading!
Posted by Louisa @ Words I Write Crazy at 6:00 AM