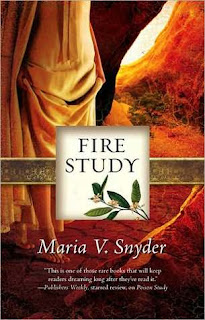 From Goodreads:
The apprenticeship is over—now the real test has begun.

When word that Yelena is a Soulfinder—able to capture and release souls—spreads like wildfire, people grow uneasy. Already Yelena's unusual abilities and past have set her apart. As the Council debates Yelena's fate, she receives a disturbing message: a plot is rising against her homeland, led by a murderous sorcerer she has defeated before....

Honor sets Yelena on a path that will test the limits of her skills, and the hope of reuniting with her beloved spurs her onward. Her journey is fraught with allies, enemies, lovers and would-be assassins, each of questionable loyalty. Yelena will have but one chance to prove herself—and save the land she holds dear.

My Review:
Wow. This book, it just blew me away. It was different from both Poison Study, and Magic Study, not only is she in both countries at one point or another in this book, but there's a lot more conflict, and some actually arguing between 2 that I wish that there hadn't been, but oh well.

It also had an pretty explosive ending, one that I really, really liked! And that has a lot of threads for the Glass series, which is fantastic, because Opal had a pretty big role in this book, so yeah, I can't wait to read some Opal-centric stories!

Yelena grew in this one, there were a lot of sacrifices, a lot of changes, and betrayals. And a lot of confusing parts, thought reading really fast might account for that. Because man, the pages just flew by till I was done, and wanted more!

This was an awesome book, and a great ending to a series! I hope we find out more about Janco and his magical awareness that's mention in  Ice Study, a second follow up short story. That'd been interesting to find out, what with Janco having his humour and all!