Week 31 Review: Time of the Eagle 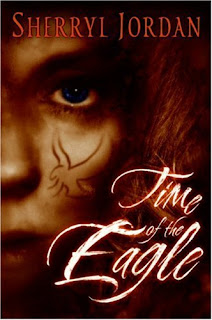 From Goodreads:
Avala's father, Gabriel (the hero of Secret Sacrament), was the great Deliverer, the giver of freedom, the hero who began the prophesied Time of the Eagle. However, this freedom has not been easy, and the Shinali tribe have found the nomadic way of life very hard. Many times they have accidentally trespassed on the lands of the Igaal or the Hena, their former enemies, and have been driven violently away, making unification seem a long way off. Avala's relationship with a wonded Igaal hunter leads to her acceptance within the Igaal tribe, where her healing gifts and visions make her indispensable. But simply helping one injured Igaal hunter is not enough to meld the two peoples. And in her absence from her own people, a rival priest has arisen, claiming that the Time of the Eagle has come and that they must fight rather than unify with the Igaal. Can Avala reverse her tribe's decision, and finally make peace between the nations?

My Review:
I've read this book before, and yet I still picked up on things that I'd forgotten or read over before. And it was good to pick up on these details, because this is just an amazing book that I love, and I just really love the story.

It's about finding who you are, from the expectations that surround you, and trying to be your own person, not what people see when they look at you.

Plus all the love, and I love the magic, and the people, they are just really good! And I'm glad that this book had a happy ending, it's based 16 years after the first one (which I read second a long time ago, about 2 years)

I just love this book, and you guys should definitely read it!!!!