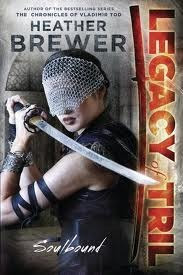 From Goodreads:
What's worse than being blackmailed to attend a hidden school where you're treated like a second-class citizen? How about nearly getting eaten by a monster when you arrive? Or learning that your soulmate was killed in a centuries-old secret war? And then there's the evil king who's determined to rule the world unless you can stop him...

Meet Kaya, a young woman with the power to heal and the determination to fight. But struggle as she will, she remains tied to three very different men: a hero who has forsaken glory, a tyrannical ruler who wants to use Kaya, and a warrior who's stolen her heart. Kaya learns the hard way that some ties can't be broken...and blood is the strongest bond of all.


My Review:
This was such a fantastic book! It sucked me right in, with an engaging plot with issues that I could relate to, of being put in a place, and being told not to question it, it just ARGH, bugs me that people are like that! And that Kaya fights that, constantly throughout the whole book-and develops quite a relationship with some people with how much she fights back-is just incredible! Loved reading this book!

So this book hit a lot of my impotent rage buttons. Like, the unfairness of the world, I just wanted to rage at it, to make it different, because it was unfair, and I don't like things to be unfair! Though I'm on the outside, I'm sure those that are in conflicts with me, don't see it that way. But isn't it always that when it's personal, you can't see the other side? But it's not really personal in this book. It's whole groups against others.

Yes, this was a book that I just had to read! It was so good, with some really fantastic twists, and with an ending that just makes me want to have more, and more, and more! If this series never ended, I would be perfectly happy with that!

Totally enjoyed this book so much, it's one of my top books of 2012, and I want the next book, like, now!

Series: Legacy of Tril #1
Read: May 07, 2012
Source: Publisher for review
Reason Why: It sounded fantastic! And it was!
Publisher: Dial
Expected Publication: July 5th 2012
Posted by Louisa @ Words I Write Crazy at 10:15 AM