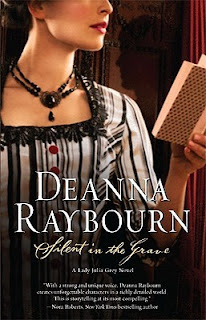 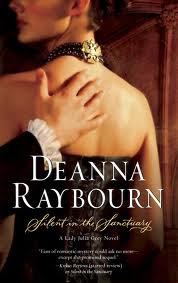 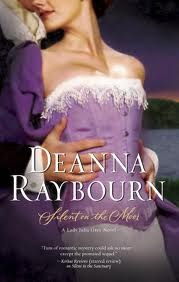 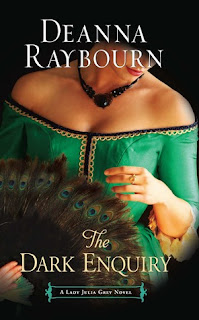 From Goodreads:
"Let the wicked be ashamed, and let them be silent in the grave." These ominous words are the last threat that Sir Edward Grey receives from his killer. Before he can show them to Nicholas Brisbane, the private inquiry agent he has retained for his protection, he collapses and dies at his London home, in the presence of his wife, Julia, and a roomful of dinner guests.

Prepared to accept that Edward's death was due to a long-standing physical infirmity, Julia is outraged when Brisbane visits and suggests that her husband was murdered. It is a reaction she comes to regret when she discovers damning evidence for herself, and realizes the truth.

Determined to bring the murderer to justice, Julia engages the enigmatic Brisbane to help her investigate Edward's demise. Dismissing his warnings that the investigation will be difficult, if not impossible, Julia presses forward, following a trail of clues that lead her to even more unpleasant truths, and ever closer to a killer who waits expectantly for her arrival.

From Goodreads:
Fresh from a six-month sojourn in Italy, Lady Julia returns home to Sussex to find her father's estate crowded with family and friends-- but dark deeds are afoot at the deconsecrated abbey, and a murderer roams the ancient cloisters. Much to her surprise, the one man she had hoped to forget--the enigmatic and compelling Nicholas Brisbane--is among her father's houseguests... and he is not alone. Not to be outdone, Julia shows him that two can play at flirtation and promptly introduces him to her devoted, younger, titled Italian count.

But the homecoming celebrations quickly take a ghastly turn when one of the guests is found brutally murdered in the chapel, and a member of Lady Julia's own family confesses to the crime. Certain of her cousin's innocence, Lady Julia resumes her unlikely and deliciously intriguing partnership with Nicholas Brisbane, setting out to unravel a tangle of deceit before the killer can strike again. When a sudden snowstorm blankets the abbey like a shroud, it falls to Lady Julia and Nicholas Brisbane to answer the shriek of murder most foul.

From Goodreads:
Despite his admonitions to stay away, Lady Julia arrives in Yorkshire to find Brisbane as remote and maddeningly attractive as ever. Cloistered together, they share the moldering house with the proud but impoverished remnants of an ancient family: the sort that keeps their bloodline pure and their secrets close. Lady Allenby and her daughters, dependent upon Brisbane and devastated by their fall in society, seem adrift on the moor winds, powerless to change their fortunes. But poison does not discriminate between classes...

A mystery unfolds from the rotten heart of Grimsgrave, one Lady Julia may have to solve alone, as Brisbane appears inextricably tangled in its heinous twists and turns. But blood will out, and before spring touches the craggy northern landscape, Lady Julia will have uncovered a Gypsy witch, a dark rider and a long-buried legacy of malevolence and evil.

From Goodreads:
Partners now in marriage and in trade, Lady Julia and Nicholas Brisbane have finally returned from abroad to set up housekeeping in London. But merging their respective collections of gadgets, pets and servants leaves little room for the harried newlyweds themselves, let alone Brisbane's private enquiry business.

Among the more unlikely clients: Julia's very proper brother, Lord Bellmont, who swears Brisbane to secrecy about his case. Not about to be left out of anything concerning her beloved—if eccentric—family, spirited Julia soon picks up the trail of the investigation.

It leads to the exclusive Ghost Club, where the alluring Madame Séraphine holds evening séances-…and not a few powerful gentlemen in thrall. From this eerie enclave unfolds a lurid tangle of dark deeds, whose tendrils crush reputations and throttle trust.

Shocked to find their investigation spun into salacious newspaper headlines, bristling at the tension it causes between them, the Brisbanes find they must unite or fall. For Bellmont's sake- and more-they'll face myriad dangers born of dark secrets, the kind men kill to keep….

My Review:
I just loved reading these books again, and then reading The Dark Enquiry for the first time! I love this series so much, and reading it all together was just so fantastic! I love reading about these characters, and these mysteries! They're just so darned fantastic!

In the beginning, Julia really is just a shell of who she could be. And she starts to come out of it during the first book. By the second, she's pretty much out, but not all the way, because she's grown and changed, and it's not till Silent on the Moor where she's really the person her journey has taken her on has made her! So fantastic!

I just really enjoy the mysteries in this book, from her husband's death, all the strange and spooky stuff going on during Christmas, the strange land that Brisbane has acquired, and finally, the new one, of her brother, and the blackmail and such!

These characters really made up the books! From Julia, Brisbane, her father, her sister, just all the bizarre and eccentric Marches, and the Brisbane's servants. And of course, the collection of pets that seems ever growing and very strange! So awesome!

I just love reading this series, and reading books by Deanna Raybourn! They're just so darned fantastic!

Silent in the Grave:

Silent in the Sanctuary:

Silent on the Moor: