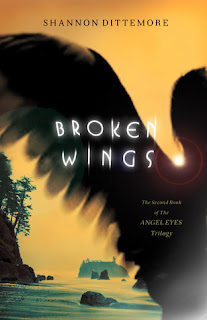 From Goodreads:
Giant angels with metal wings and visible song. A blind demon restored from the pit of darkness. And a girl who has never felt more broken.

Brielle sees the world as it really is: a place where the Celestial exists side by side with human reality. But in the aftermath of a supernatural showdown, her life begins to crumble. Her boyfriend, Jake, is keeping something from her—something important. Her overprotective father has started drinking again. He’s dating a much younger woman who makes Brielle’s skin crawl, and he’s downright hostile toward Jake. Haunting nightmares keep Brielle from sleeping, and flashes of Celestial vision keep her off kilter.

What she doesn’t know is that she’s been targeted. The Prince of Darkness himself has heard of the boy with healing in his hands and of the girl who sees through the Terrestrial Veil. When he plucks the blind demon, Damien, from the fiery chasm and sends him back to Earth with new eyes, the stage is set for a cataclysmic battle of good versus evil.

Then Brielle unearths the truth about her mother’s death and she must question everything she ever thought was true.

Brielle has no choice. She knows evil forces are converging and will soon rain their terror down upon the town of Stratus. She must master the weapons she’s been given. She must fight.

But can she fly with broken wings?


My Review:
I enjoyed this book. There were parts where the church stuff seemed a bit much, and while it is a middle book in a series, we did learn a whole bunch of things, like what happened with her Mom, and yeah, overall, it was a good book!

There's a new girl in town, Olivia, though technically she's not a girl, since she's dating Brielle's dad. And the halo didn't like her, neither did Brielle. And then Jake became secretive, and her dad started drinking again. Basically, her life's going downhill, and fast. There were some good, happy moments in this book, but they were tinged with some dark moments, too.

One thing I have to say, is that this cover isn't as pretty/eye-popping as the first one. And there doesn't seem to be really anything to link Angel Eyes to Broken Wings (And the 3rd book, Dark Halo, which has a similar cover to this one) besides the fact that they both have angels/angel imagery, but different styles, and I checked, and there's no similar cover for Angel Eyes, which for a reader who doesn't know that this series is linked (beyond that it says that it says it's a book in a series) then they might be a bit confused, because there is little to no mention of what was mentioned in the first book, which, personally, for me, since I read so much, and it's been so long since I read the first book, well, it was harder to get into. I got over it, but like I said, I read a lot of books, so this happens a lot to me.

At the end, well, can I say cliffhanger? What with what was going on, and all that was revealed, and what happened, that was pretty much non-stop action or conflict, that was a pretty amazing ending! Which set up for a spectacular finale, and it sounds like it's going to be! Can't wait!

This was a pretty great book. Things happened, things evolved, and yeah, it was just really good. Check it out! 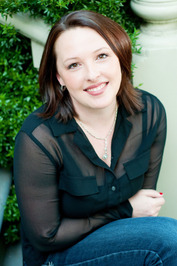 Bio:
Shannon Dittemore has an overactive imagination and a passion for truth. Her lifelong journey to combine the two is responsible for a stint at Portland Bible College, performances with local theater companies, and a focus on youth and young adult ministry. The daughter of one preacher and the wife of another, she spends her days imagining things unseen and chasing her two children around their home in Northern California. Angel Eyes is her first novel.