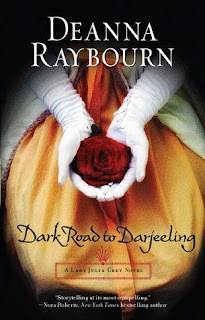 From Goodreads:
After eight idyllic months in the Mediterranean, Lady Julia Grey and her detective husband are ready to put their investigative talents to work once more. At the urging of Julia's eccentric family, they hurry to India to aid an old friend, the newly widowed Jane Cavendish. Living on the Cavendish tea plantation with the remnants of her husband's family, Jane is consumed with the impending birth of her child--and with discovering the truth about her husband's death. Was he murdered for his estate? And if he was, could Jane and her unborn child be next?

Amid the lush foothills of the Himalayas, dark deeds are buried and malicious thoughts flourish. The Brisbanes uncover secrets and scandal, illicit affairs and twisted legacies. In this remote and exotic place, exploration is perilous and discovery, deadly. The danger is palpable and, if they are not careful, Julia and Nicholas will not live to celebrate their first anniversary.

My Review:
Man, I loved reading this book! It's the first one that they're married the whole book, and it was just so good! The dynamic, it didn't really change or shift, it evolved, because they have the physical side that has been denied for years. And all that stuff. So it was so great to read this book!

This book, the mystery is personal, again. Because Jane, who used to be lovers with Julia's sister, her husband was possibly murdered. So there was that. And there was the fact that Brisbane's dad was there. And meeting him, that's been a want of mine, so it was great that we got that!

Julia's become quite a detective over the course of the series! I would never have guessed it was that guy! This mystery was just kinda sad, because there was so much death, and it was all pretty pointless. And that's just sad, you know?

Such a fantastic book, and I need to read this series some more!