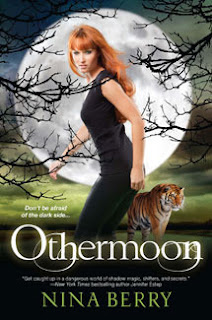 From Goodreads:
Everyone has secrets. I had no idea mine would lead me into shadow.

Dez has found the place where she belongs. With the otherkin. With Caleb. Or so she thought. As the barriers between our world and Othersphere fall, a wall rises between Dez and Caleb, leaving her fiercest enemy her only friend.

And maybe something more.

Now Dez must make a devastating choice: keep the love of her life, or save the otherkin from annihilation.

My Review:
This was a really fantastic book! I loved the first one, and I loved this one just as much, if not more! The characters were amazing, and the stakes were higher, and everything was just hard for them, and perfect for us readers!

So one big question that I had was where did Dez came from. We got some answers, but it was truly the ending where we got them. Which just means that my need for the last book has been ramped up to like 10!

Loved the romantic troubles. That they were so out of touch with each other, that they broke up, and all that stuff with Lazar, because yeah, Lazar killed Caleb's mom-he killed his half brother's mom, the parent in which they aren't half brothers with. Yeah.

So I just need to talk about that ending again! I mean, there was so much going on, things I was hoping for to happen, and then the unexpected. Like that death! I mean, poor Ember! And then where things were left! I need more!

Such a fantastic book, so entertaining and great, and I really can't wait for the sequel!