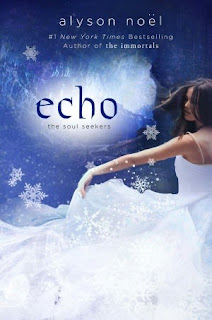 From Goodreads:
She inherited a magical destiny—and a mission to stop a powerful family of dark sorcerers. She never expected to fall in love with one of them.

There's still so much Daire Santos has to learn about being the last Soul Seeker….and about herself.  As her magical training becomes more intense, so does her relationship with Dace.  But when she learns that his connection to the evil Richter family goes far deeper than she ever imagined, she begins to question if love really can conquer all.

Dace is painfully aware that he wouldn't exist if it wasn't for the Richters' dark magic—and now his brother Cade is determined to use his love for Daire against him.  Dace is willing to sacrifice anything to protect the girl he loves —including his own life.  But will Daire allow it?  And what if defeating Cade costs not only his life, but his soul too?

My Review:
I'll admit that it took me a while to get to reading this book. Part of that was that Fated ended in a pretty good spot. Another is that I don't want to wait to read Mystic. And the last part, was that is connected to first, is that I didn't want to read about bad things happening to these characters again!

And then there was Phyre who was going to try and kill Dace, which yeah, is not a good thing, so yeah, how that ended up, was better then what could've happened, though not by too much, because there were some sacrifices!

I really enjoyed that ending! So good, and action packed, and it's a cliff hanger, because hey, all 3 of them are in various stages of dying, or seriously injured, and we won't know who is where until Mystic, so the wait there is going to be torture!

I really enjoyed this book, and yeah, I can't wait to read more!