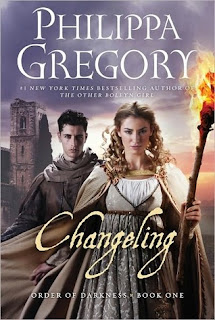 From Goodreads:
Italy, 1453. Seventeen-year-old Luca Vero is brilliant, gorgeous—and accused of heresy. Cast out of his religious order for using the new science to question old superstitious beliefs, Luca is recruited into a secret sect: The Order of the Dragon, commissioned by Pope Nicholas V to investigate evil and danger in its many forms, and strange occurrences across Europe, in this year—the end of days.

Isolde is a seventeen-year-old girl shut up in a nunnery so she can't inherit any of her father's estate. As the nuns walk in their sleep and see strange visions, Isolde is accused of witchcraft—and Luca is sent to investigate her, but finds himself plotting her escape.

Despite their vows, despite themselves, love grows between Luca and Isolde as they travel across Europe with their faithful companions, Freize and Ishraq. The four young people encounter werewolves, alchemists, witches, and death-dancers as they head toward a real-life historical figure who holds the boundaries of Christendom and the secrets of the Order of the Dragon.

The first in a series, this epic and richly detailed drama is grounded in historical communities and their mythic beliefs. It includes a medieval map of Europe that will track their journey; and the interior will include relevant decorative elements as well as an interior line illustration.

And look for a QR code that links to a note from the author with additional, detailed information about the setting and the history that informed the writing. With Philippa Gregory's trademark touch, this novel deftly brings the past—and its salacious scandals—vividly and disturbingly to life.

My Review:
Yes! This book was really fantastic! I haven't read any of her adult novels, since that's not my sort of thing, but I have heard of them. Which is why I was so excited to hear about this book, a YA book-and series at that!-written by Philippa Gregory, well, I just had to read it!

First off, I really, really enjoyed these characters! Isolde, whose situation was just totally unfair, she was supposed to inherit her father's estate, but because of plottings of the guys, is sent to a nunnery. Luca, a young man who has recently been inducted to a secret group, and sent to investigate curious things out in the world. And both of their servants, Ishraq and Freize. They were so great to read about!

Then there was the mystery, of what was going on at the nunnery. Because Isolde isn't a witch, and neither is Ishraq, but the nuns are still sleepwalking and the various odd and strange things. And what it turns out to be, well, yeah, that was just a little bit sinister!

Really enjoyed the ending, because this is the start of the series, and yeah, this ending, was just perfect! They're going on the journey, together because it's convenient, to go apply for help, and go on to investigate the next case. And maybe, kinda, falling in love, the two couples!

This was a really great, fantastic book, and I can't wait to read more!

Author: Philippa Gregory
Series: The Order of Darkness #1
Read: January 29th, 2013
Source: Library
Reason Why: Sounded really good, and it's a Historical Fiction 2013 Book! And it came out on my birthday!!!
Publisher: Simon Pulse
Published: May 24th 2012