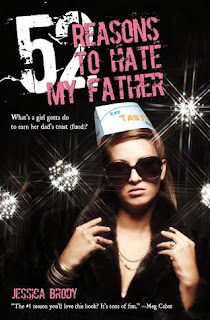 From Goodreads:
Being America's favorite heiress is a dirty job, but someone's gotta do it.

Lexington Larrabee has never to work a day in her life. After all, she's the heiress to the multi-billion-dollar Larrabee Media empire. And heiresses are not supposed to work. But then again, they're not supposed to crash brand new Mercedes convertibles into convenience stores on Sunset Blvd either.

Which is why, on Lexi's eighteen birthday, her ever-absent, tycoon father decides to take a more proactive approach to her wayward life. Every week for the next year, she will have to take on a different low-wage job if she ever wants to receive her beloved trust fund. But if there's anything worse than working as a maid, a dishwasher, and a fast-food restaurant employee, it's dealing with Luke, the arrogant, albeit moderately attractive, college intern her father has assigned to keep tabs on her.

In a hilarious "comedy of heiress" about family, forgiveness, good intentions, and best of all, second chances, Lexi learns that love can be unconditional, money can be immaterial, and, regardless of age, everyone needs a little saving. And although she might have 52 reasons to hate her father, she only needs one reason to love him.

My Review:
This was a really sweet book. And on one hand, she did kinda deserve this. But it shouldn't have been something her trust fund was dependent on, but I guess that was just about the only thing that would motivate her to do this.

That he did this for her own good, we can see that, because we haven't grown up like she did. Which is partially his fault. But anyways. She didn't, and so that was a pretty big source of conflict! So great to read! And then when she started these jobs, oh, wow!

I didn't really like her in the beginning. But she was a smart girl, and she looked for the silver lining. And then there was the relationship between her and Luke, which was really sweet and funny and cute to read about!

The ending was really great! That even though her dad had taken off the whole thing that she had to do these jobs for a year to keep her trust fund, that she kept going. I found that really admirable! Plus, the place where her dad got the list, from menial jobs that now rich people have, yeah, that was pretty cool!

This was a really great, sweet book, and so hilarious, and I can't wait to read more books by Jessica Brody!