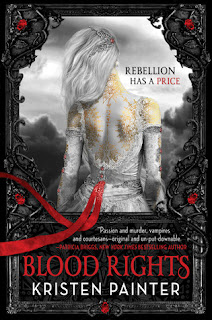 From Goodreads:
Rebellion has a price.

The lacy gold mapped her entire body. A finely wrought filigree of stars, vines, flowers, butterflies, ancient symbols and words ran from her feet, up her legs, over her narrow waist, spanned her chest and finished down her arms to the tips of her fingers.

Born into a life of secrets and service, Chrysabelle's body bears the telltale marks of a comarré—a special race of humans bred to feed vampire nobility. When her patron is murdered, she becomes the prime suspect, which sends her running into the mortal world...and into the arms of Malkolm, an outcast vampire cursed to kill every being from whom he drinks.

Now, Chrysabelle and Malkolm must work together to stop a plot to merge the mortal and supernatural worlds. If they fail, a chaos unlike anything anyone has ever seen will threaten to reign.

My Review:
So this was an utterly fantastic book! I enjoyed reading it so much, it was so entertaining and great, and different and original, and I'm so glad that it's a series, because that means more time in this world, with these characters! Which is the best!

This world of vampires, and of Comarre, humans that are bred to feed vampire nobility, was just so fascinating! And Chrysabelle is a Comarre, and Malkom is a vampire. But a vampire cursed, and that complicates things!

So the fact that it's a vampire book, and a dystopian book, well, I've read a few like that, but they were YA, I hadn't read an adult version of those elements. And what with the difference of the vampires, well, that was really fantastic!

Really enjoyed that climax! There was a lot going on-like her aunt-and there's a reason why it's a series. so not all of the threads were completely tied, so I can't wait to see how they're going to be death with, and the new ones that are going to be introduced!

Such a great book, and I can't wait to read more of this series!