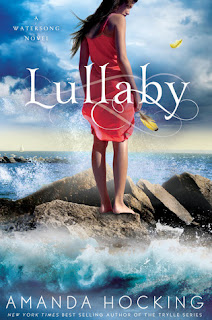 From Goodreads:
Harper only wanted a safe, normal life. But when her younger sister Gemma runs off with a dangerous clique of beautiful girls, Penn, Thea, and Lexi, everything changes. Vowing to get her sister back no matter what the cost, Harper must face dangers unlike any she's ever experienced. Fortunately, she has Daniel by her side, a gorgeous guy who's devoted to helping her find her sister—and who's immune to the girls' dark powers.

While Harper searches for her sister, Gemma struggles to adjust to her new life.  Gemma's powers are growing by the day, and the longer she lives with her new "sisters," the harder it is to resist entering their magical world.  It's a realm both dark and beautiful, and where she's plagued by strange hungers and unspeakable needs.  Just as she's drifting far away from her old life, Harper and Daniel find her...but no one can deny how much she's changed.  All she wants is to return to her family and the mortal world, but how can she do that when she's become something else entirely—and will they still love her once they learn the truth?

My Review:
I enjoyed this book so much! I really enjoyed being in this world again, and the threads of the ending of Wake are picked up pretty quickly! And yeah, while this book isn't much of an action book, we do learn a ton about the sirens and this world, and yeah, I just want more!

So in this book, we know about the sirens. And now the problem, mainly, is finding Gemma, from wherever they've gone. And getting her back. Which is an adventure in and of itself, between Daniel and Harper!

I enjoyed learning more about sirens, and their personalities, and some history, because this book had a few POV's! And yeah, this was all really interesting stuff, though sometimes in a creepy, bad way, considering!

I just loved that ending! It's much more positive then the first one, they have a chance to free Gemma, dealing with Daniel's immunity, and yeah, they're going to be Capri, which will make things both easier and harder-Gemma's at home, but the sirens are staying in their town!

I really enjoyed this book so much, and I can't wait to read more!